High channel inventory continued to be a concern even with vendors’ efforts on channel schemes and price corrections to clear the stocks. Overall, the ASP (average selling price) reached a record US$226, growing by 15% YoY and 6% QoQ. “The ASP has grown consistently for the past eight quarters in a row due to increasing costs and growing 5G shipments at mid-premium price points,” said Upasana Joshi, Research Manager, Client Devices, IDC India.

• Online channels clocked a record 58% share, although with flat YoY growth shipping 25 million units. Multiple rounds of eTailer sales (The Big Billion Days on Flipkart and Amazon Great India festival) were supported by preferential platform pricing, online exclusive deals, and offers/discounts. Amidst all the action in the online channels, offline shipments declined by 20% YoY as they struggled to generate demand while competing with aggressive online plays.

• MediaTek-based smartphones increased to 47% of the total market, while Qualcomm’s decreased to 25% with UNISOC following at 15%.

• The sub-US$300 segment underperformed, as shipments declined by 15% YoY. The premium segment of US$500+ continued to remain the highest growing price band with 64% growth YoY and 8% share. Apple led with a 63% share of that space, followed by Samsung (22%) and OnePlus (9%). 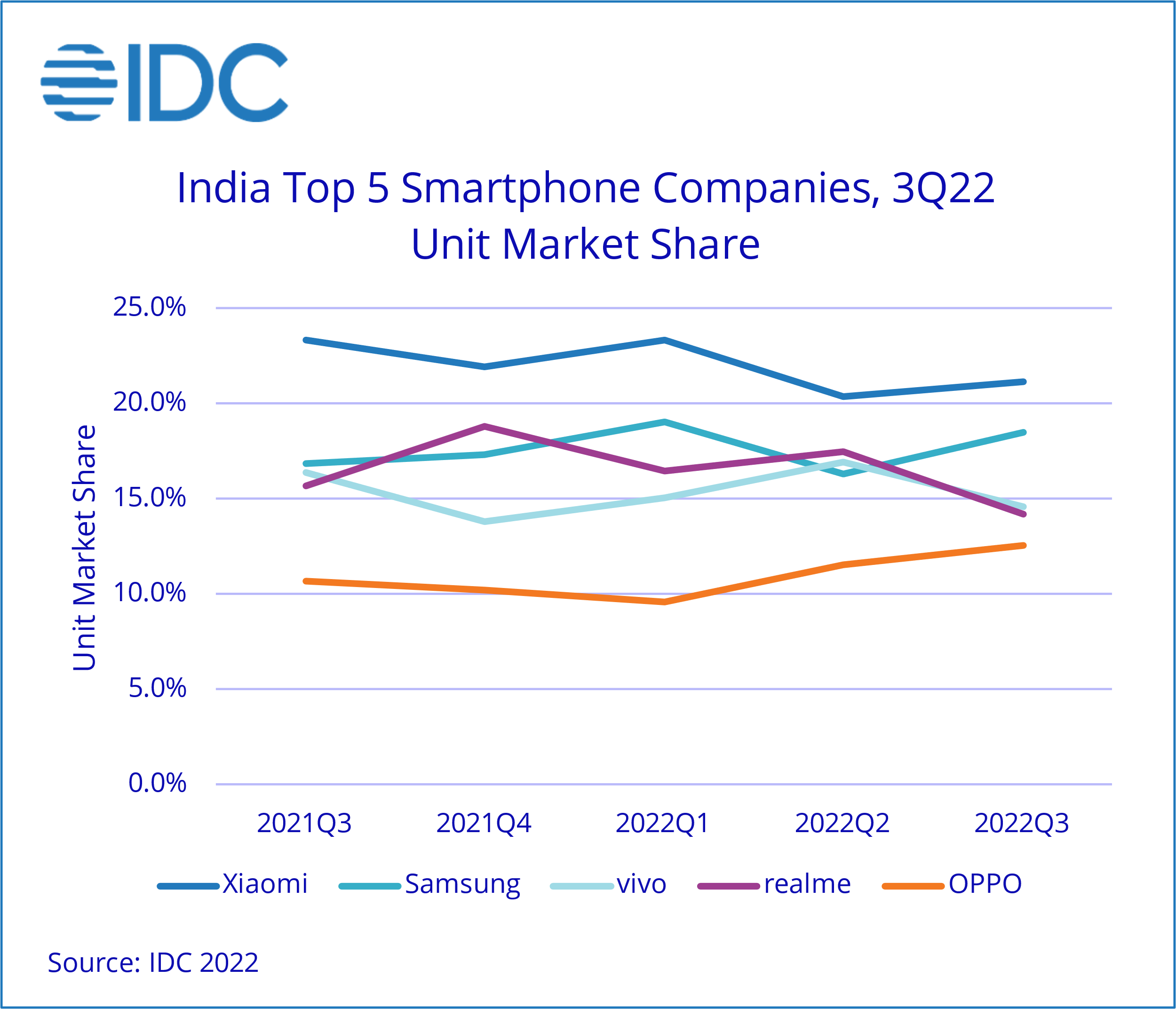 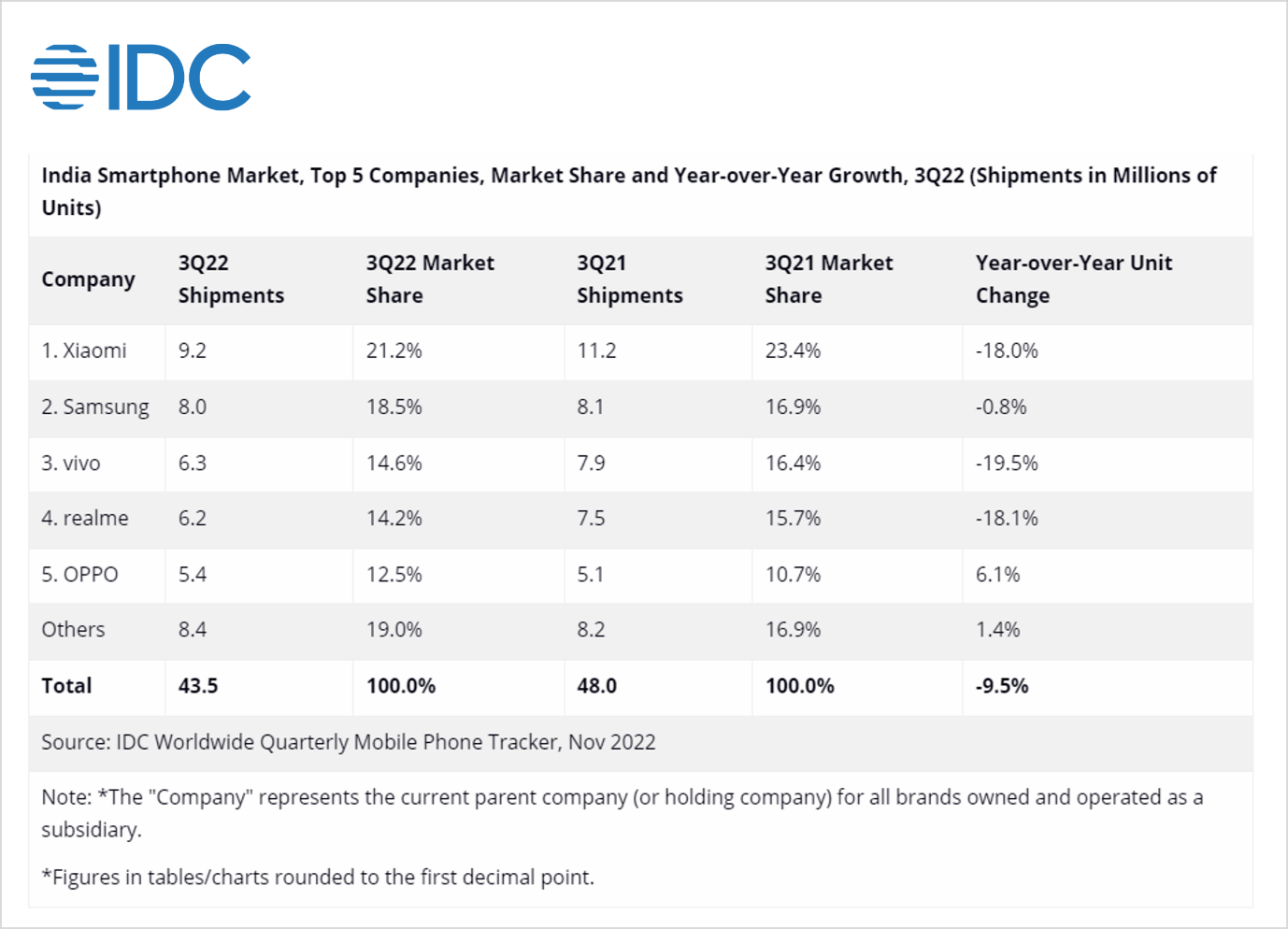 Xiaomi maintained its lead, but with declining shipments (-18%) YoY in 3Q22. More than 70% of shipments went to online channels, resulting in a share of 27% of the online channel (including sub-brand POCO). The newly launched Redmi A1 along with the existing Redmi 9A Sport /10A/10 helped garner volumes in the sub-US$200 segment.

Samsung regained its second slot, but with flat shipments of 8 million in 3Q22. It led the 5G segment with a 27% share of that space, with 53% of its portfolio already on 5G. Also, its online portfolio driven by the Galaxy M and F series ensured a strong 18% online share (tied with realme). The Galaxy M13 was amongst the five highest-shipped devices nationally.

vivo dropped to the third position, with a 20% YoY decline in shipments. 35% of its shipments went to the online channel, its highest ever, led by the T series and iQOO lineup. But the brand remained offline-heavy with a 22% share of the offline space. It also maintained its second slot in the 5G segment with a 15% share in 3Q22.

realme dropped to the fourth position, with shipments declining at 18% YoY. Its C series continued to drive the majority of its volumes, with the C35 as the highest-shipped smartphone nationally. Two-thirds of realme shipments went to online channels, where it held strong in second place with an 18% share.

OPPO, in the fifth slot, was the only vendor among the Top 5 with shipment growth at 6% YoY. OPPO too had grown its online portfolio with a 23% contribution, while it stood at the leadership slot in offline channels. OPPO had a clear focus on enhancing its lineup in the US$300-500 segment, driven by the Reno8 series.

“Inventory pile up and post-festive cyclical demand tapering will lead to a muted 4Q22. 2022 is likely to see shipments of around 150 million units, a decline of 8-9% YoY. The major challenges going into 2023 are the impact of inflation on consumer demand, increasing device costs, and slow feature phone-to-smartphone migration. However, the migration of 4G smartphone users to 5G smartphones should give a growth fillip to the market in 2023, especially in the mid-premium and above segments," says Navkendar Singh, Associate Vice President, Devices Research, IDC.

IDC Tracker  products provide accurate and timely market size, vendor share, and forecasts for hundreds of technology markets from more than 100 countries around the globe. Using proprietary tools and research processes, IDC's Trackers are updated on a semiannual, quarterly, and monthly basis. Tracker results are delivered to clients in user-friendly Excel deliverables and on-line query tools.

International Data Corporation (IDC) is the premier global provider of market intelligence, advisory services, and events for the information technology, telecommunications, and consumer technology markets. With more than 1,100 analysts worldwide, IDC offers global, regional, and local expertise on technology, IT benchmarking and sourcing, and industry opportunities and trends in over 110 countries. IDC's analysis and insight helps IT professionals, business executives, and the investment community to make fact-based technology decisions and to achieve their key business objectives. Founded in 1964, IDC is a wholly owned subsidiary of International Data Group (IDG), the world's leading tech media, data, and marketing services company. To learn more about IDC, please visit www.idc.com. Follow IDC on Twitter at @IDC  and LinkedIn. Subscribe to the IDC Blog for industry news and insights.