Ho Chi Minh City, November 14 2022 – Vietnam’s smartphone shipments grew sequentially by 1.6% to reach 3.2 million units in 3Q22 according to International Data Corporation's  (IDC) Worldwide Quarterly Mobile Phone Tracker. Year-on-year growth was 28.5%, but this was against an abnormally low base last year, and shipments were still significantly lower than they were before the pandemic in 3Q19. Consumer demand was soft, as a result of high inflation and a weaker macroeconomic scenario. According to the General Statistics Office, Vietnam's exports were lower than expected, declining 14.3% from August to September, resulting in factories going idle.

"The rising recessionary risks in the United States and the European Union from aggressive monetary tightening and supply disruptions due to the Russia-Ukraine war are putting high pressure on the Vietnam economy, which still needs help in recovering from the pandemic. Consumer sentiment is beginning to take a hit as everyday Vietnamese feel the pinch of high prices,” said Thanh Vo, Market Analyst at IDC Vietnam. 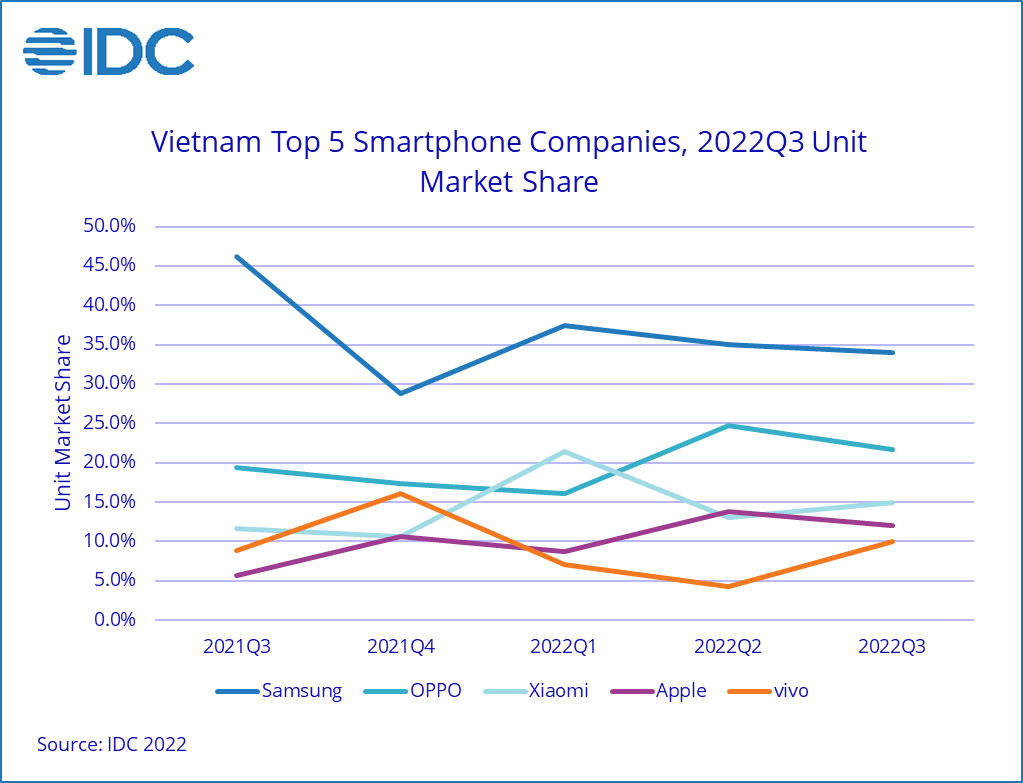 Samsung retained its lead in the smartphone market with 1.1 million units, decreasing 5.4% YoY, as its share dropped to 34.0% in 3Q22 from 46.2% in 3Q21. However, their foldables series Samsung Galaxy Z Fold4 and Galaxy Z Flip4, which were launched in August, managed to achieve a more than threefold YoY increase. Samsung expansion through single-brand stores continued with the opening of their premium stores in Ho Chi Minh City.

OPPO, took second place with 21.6% market share in the third quarter of the year. The Reno8, Reno8 Pro and Reno8 Z, which launched at online and offline events, with a focus on consumer experience and photography, had a higher shipment during the launch quarter compared to the Reno 7 range.

Apple's shipments dropped 11.9% QoQ in 3Q22 but had a dramatic growth of 173.3% YoY. The QoQ drop was a result of channel partners clearing inventory and preparing for the launch of the iPhone 14 series in October 2022. Apple’s support for its local partners by adjusting distribution and pricing policies has helped grow local shipments and reduce the number of hand-carried iPhones from overseas.

IDC Tracker products provide accurate and timely market size, vendor share, and forecasts for hundreds of technology markets from more than 100 countries around the globe. Using proprietary tools and research processes, IDC's Trackers are updated on a semiannual, quarterly, and monthly basis. Tracker results are delivered to clients in user-friendly excel deliverables and online query tools.

International Data Corporation (IDC) is the premier global provider of market intelligence, advisory services, and events for the information technology, telecommunications, and consumer technology markets. With more than 1,300 analysts worldwide, IDC offers global, regional, and local expertise on technology and industry opportunities and trends in over 110 countries. IDC's analysis and insight helps IT professionals, business executives, and the investment community to make fact-based technology decisions and to achieve their key business objectives. Founded in 1964, IDC is a wholly-owned subsidiary of International Data Group (IDG), the world's leading tech media, data and marketing services company. To learn more about IDC, please visit www.idc.com. Follow IDC on Twitter at @IDCASEAN and LinkedIn. Subscribe to the IDC Blog for industry news and insights.